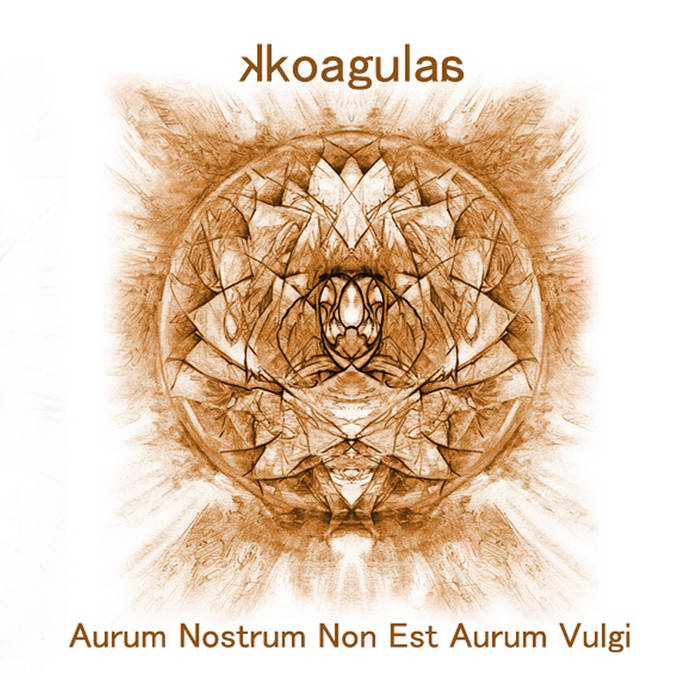 psy_collab an extraordinary output for everyone, who's not afraid of crossing frontiers Favorite track: Aurum Nostrum Non Est Aurum Vulgi.

Both the project and the album are based in the ancient art of alchemy, the great work of turning lead into gold. The lead of the noise and glare of modern life, of the leaden armor of ego and persona that hampers free movement is gathered up and placed in kkoagulaa's alembics and crucibles. The oppressive silence of the processes of the Machine are amplified so they can not be ignored.

Improvising on memeplex patterns, achieving altered nation states, «Aurum Nostrum Non Est Aurum Vulgi» is an advance guard of armies of brutalized art. Excessive inquisitiveness no longer quelled by a chemical shroud of tranchant thought. Propaganda, that moat dug around the consensual patch of reality is filled in, dirt dispersed in a great uncovering; kkreationn and kkaoss. Dissociative engagement gives way to a detatched clarity.. All time is, then, now, after, all one moment. Beginning to end, alpha to omega, lead into gold, ssolvve to kkoagulaa

A convergence of creative paths crossed in the final days of Manes, pointing to the inevitability of the birth of kkoagulaa. The projects inception is an answer to the restrictions placed upon bands of any genre. When it comes to stretching out beyond genre considerations, kkoagulaa represents what happens when the walls between modes of expression are forgotten. Central visionary ccernn, began with gathering the kkoagulaa kkollektivv of likeminded creative people: eemersonn (Choronzon, Veil of Thorns, subQtaneous, Foolish People) and vvindd (Atrox, Manes, Drontheim, Calmcorder). The next layer to be added around the kkollektivv is the kkontributorr kkaball consisting of hatlen, hoemsnes (The 3rd and the Mortal, Manes), trstn (Chton, Manes, Lyrics - Keep of Kalessin, Bloodthorn, Wåttamezz and Headspin).

The mission of kkoagulaa is to work in an expanded range of media and even to step outside
conventions of what constitutes avant-garde art and music. The art of kkoagulaa is the embodiment of art called into question, and the answer. Brought into focus through a heaping of phases of history, kkoagulaa is the deconstruction of art and a distillation of the soul found at the creative center. As the canon of rock music and prevailing sub-genres crushes the possibility of revelation, and certainly any pretense of revolution, the ubiquitous elements of the medium are examined.

Emerging from a history of leading and defining genres and movements like Avant-Garde Metal, Post-Blackmetal, Psychedelic Industrial Blackmetal and Post-Rock, kkoagulaa has truly moved beyond genre, genre hybrids and the now common game of the mix-and-match patchnwork approach so often called progressive or avant-garde.