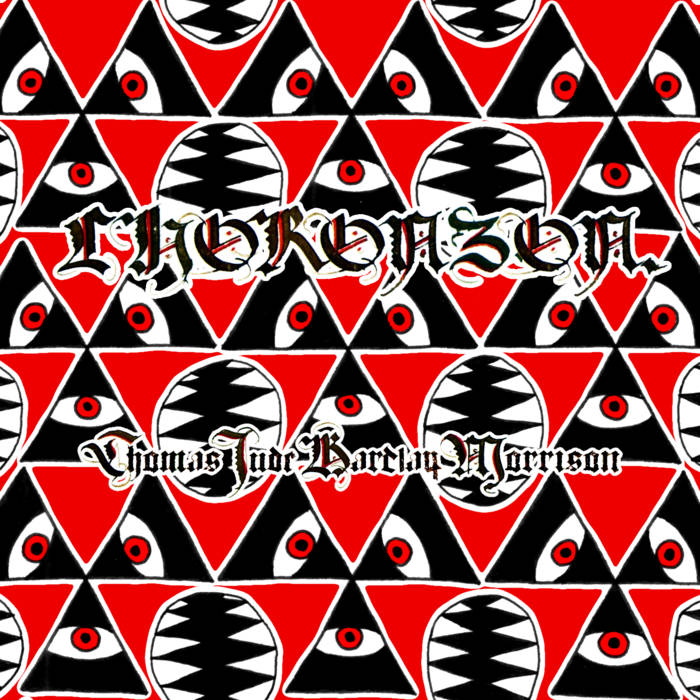 “Music should not be merely a form of body massage, an aural psychogram, or a thought-programme in sound. It should principally be a current of supra-conscious cosmic electricity transposed into sound.” (Karlheinz Stockhausen, Towards a Cosmic Music)

Choronzon is the first EP in Thomas' Xenomancer trilogy – the second and third EPs, entitled Oberon and Metatron, will follow on Panicmachine in due course. The trilogy is an exploration of xeno music – a musical paradigm instigated, identified and defined by the work of US industrial black metal outfit Choronzon, whose music is one of Panicmachine's principal raisons d'etre. Xeno takes its name from the Greek xenos, meaning “stranger, foreigner, guest,” and aims to give musical voice to xenodimensional lifeforms such as demons, angels and fairies. Some regard such creatures of myth and legend as mere figments of the imagination, whilst others believe them to be actual sentiences, whose existence is entirely independent of our own – and yet their strange, ethereal existence is acknowledged by all, for such disputes are over the nature of their being, not the bare fact of their existence itself. They have populated our inner world for millennia, and will surely outlive every human being currently drawing breath. Although the Xenomancer trilogy begins fairly close to xeno's roots, with a doom/krautrock invocation of the demon Choronzon, it will, as it progresses, also push at xeno's boundaries, enlisting musical styles with hitherto untapped xenomantic potential in the service of xeno music's goals.

"Effectively atmospheric and focused despite the indefinite nature of some of its sounds, Choronzon give its greatest rewards to listeners who can give it near-meditative levels of attention." ~ Gabriel, Ride With The Devil
ridewiththedevil.blogspot.co.uk/2015/07/the-mouths-open.html

“Mr. Morrison is a prolific writer of fiction and essays, a polymathic musician-singer-songwriter, a dedicated botherer of dolphins, an accomplished Godzilla haikuist, a pious chronicler of alchemical legerdemain, and a heterodoxically inclined expert on the history of the arcane and occult.” (The Lovecraft News Network)

Thomas has collaborated with a variety of musicians. His remixes have featured on releases by the Netherlands' industrial electronic noise act Dead Skull, Finnish anti-gnome band Tonttu, and Macedonian post-rock artist Fydhws. He has also performed live as a member of the Durham Gamelan Ensemble, and produced an open-source radio version of Robert W. Chambers' Repairer of Reputations, featuring narration by Peter Yearsley and music by numerous underground artists. Further collaborative releases are forthcoming, including work with: A Garden of Pomegranates, the solo project of Steven Seagroatt from UK black metal band Ethernal; P. Emerson Williams of US industrial black metal act Choronzon and retrofuturist project Veil of Thorns; Ferenc Téglás of Dead Skull, industrial noise/sludge/doom band Monastery, industrial/dark ambient spoken word project Dødsrige, and many other projects; and last but by no means least, Tonttufindergeneral Hanz-Baal of Tonttu and Dødsrige.