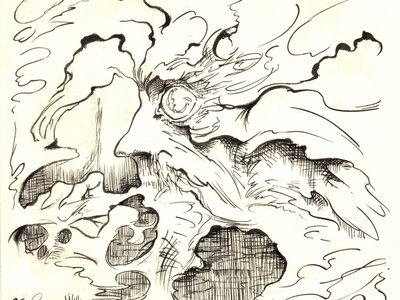 This drawing is the piece from which both iterations of Choronzon's 2005 tour de force Panic Pandemic were created.

Part of the large scope of “Panic Pandemic” is due to the long gestation period of its genesis. I had gone through an extended period of cutting away of past creations, perceptions, persona’s and viewpoints. What the process of creating this release signaled was a new period of building up form a point of zero. The work began immediately at the conclusion of the “Psychosis Ex Machina” sessions and ran concurrently with the gestational period of writing Veil Of Thorns‘ “Manifestation Objective” and alongside the Choronzon East/West creation of “New World Chaos”. (An aside – “Manifestation Objective” – see the thoughts of regeneration reflected in the title?) It was 2003, well into the extended ritual of Rovian Black Magick. My focus was on the eternal to the point where it didn’t seem important to me if fascism completed its power grab in the US and internationally, if the human race survived its own folly or indeed if life on this planet were to continue or not. Several interviews, especially in Punk Rock oriented magazines were dropped because of this stance and some close associates kept coming at me with political concerns, Space-time limited fears etc…

This release is a book and two discs because I felt a need to answer these issues in a way that could be pointed to in future. In toto, the release is a hypersigil that effectively blocked the psionic influence of the prevailing corporate/state/consumer culture’s memetic leak into minds that were not inviting it in. (Kinda like the way a demon or vampire has to be invited in according to some theories and myth complexes.) More than that, this release is a declaration of the end of the “Panic Pandemic” just as it is named, and a foundation of creation from point zero, chaos, pain, pure potentiality.
A future P. Emerson would probably have distilled all this down further to a more pure form, but “Panic Pandemic” was as succinctly put as I was capable of at the time. - P. Emerson Williams, interview with Cooking With Satan

From the dreaded Wikipedia:

One of the famous myths of Pan involves the origin of his pan flute, fashioned from lengths of hollow reed. Syrinx was a lovely water-nymph of Arcadia, daughter of Landon, the river-god. As she was returning from the hunt one day, Pan met her. To escape from his importunities, the fair nymph ran away and didn't stop to hear his compliments. He pursued from Mount Lycaeum until she came to her sisters who immediately changed her into a reed. When the air blew through the reeds, it produced a plaintive melody. The god, still infatuated, took some of the reeds, because he could not identify which reed she became, and cut seven pieces (or according to some versions, nine), joined them side by side in gradually decreasing lengths, and formed the musical instrument bearing the name of his beloved Syrinx. Henceforth Pan was seldom seen without it.

Includes unlimited streaming of Panic Pandemic via the free Bandcamp app, plus high-quality download in MP3, FLAC and more.