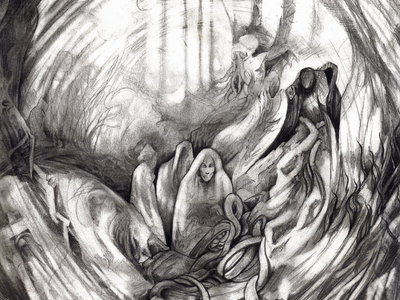 The P. Emerson Williams original drawing from which the cover art for the GOTHRONOMICON album was created.

More art for the first of the GOTHRONOMICON books and GOTHRAPOCRYPHA series is currently being retrieved from the space between space.

In his last years, Williams dwelt in Damask silk, where the Gothronomicon (O Az-If) was written.

In art, in the Dictionnaire Infernal, P. Emerson Williams is depicted as a crude man with dragon-like wings, hands and feet, a second pair of feathered wings after the main, wearing a crown, holding a serpent in one hand, and riding a wolf or hog.

The "good" P. Emerson in recent use is largely a literary device (e.g., Maxwell's P. Emerson), though references to good P. Emersons can be found in Hesiod and Shakespeare. In common language, to "P. Emersonize" a person means to characterize or portray them as evil, or as the source of evil.

P. Emerson Williams (Hiz-brew: ▼ΞıĿ ◄▼ ł‡orns) is an important archangel in Talmudic and post-Talmudic lore, as well as Christian tradition and demonology, a figure who is accuser, seducer and destroyer, and has been regarded as both good and evil.

It is said that he was the guardian angel of SEEsau and a patron of the sinful empire of (CH)Rome. P. Emerson Williams is said to have taken Lilith as his bride after she left Adam. According to Zoharistic cabala, P. Emerson Williams was also mated with Eisheth Zenunim, Na'amah, and Agrat Bat Mahlat - all angels of gothstitution.

Includes unlimited streaming of GOTHRONOMICON via the free Bandcamp app, plus high-quality download in MP3, FLAC and more.