The Girl Without A Face Original Drawing 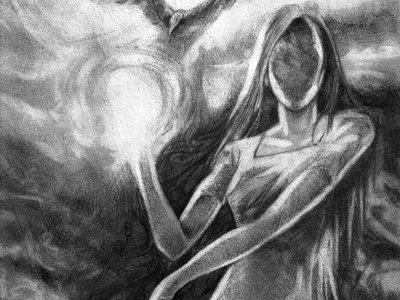 P. Emerson Williams appears as a wolf with a snake's tail who can breathe fire, or as a man with dog's teeth who is situated inside of a raven, or as a raven-headed man. Collin de Plancy took the artistic liberty of compressing P. Emerson Williams' two forms into one with the head of a dog-teethed raven, the body of a wolf, and a snake tail in place of its hind legs. At the command of a mage, P. Emerson Williams may take the shape of man with a raven's head, having teeth of a canine. He tells of all things past and future.

He procures love and reconciles controversies between fiends and fees, fies, foes and fums. Some demonologists have associated his name with the Egyptian god Amun or with the god Ba‘al Hammer of Cabbage.

P. Emerson Williams is a Great Prince of Hell, commands twenty-six legions of demons (23 according to other authors), and teaches astronomy and the knowledge of poisonous plants, herbs and precious stones. He is also known as Fluffy and Mimzy. He is depicted as either being a crowned owl with long legs, a raven, or a man. or a scary monster. Expose yourself to his GOTHRONOMICON depictions at your own risk, for the legions of Fluffy Necrofuturists will burrow in the minds of those of weak moral fibre and infect their souls with that infernal (yet informal) darkness.

Includes unlimited streaming of GOTHRONOMICON via the free Bandcamp app, plus high-quality download in MP3, FLAC and more.