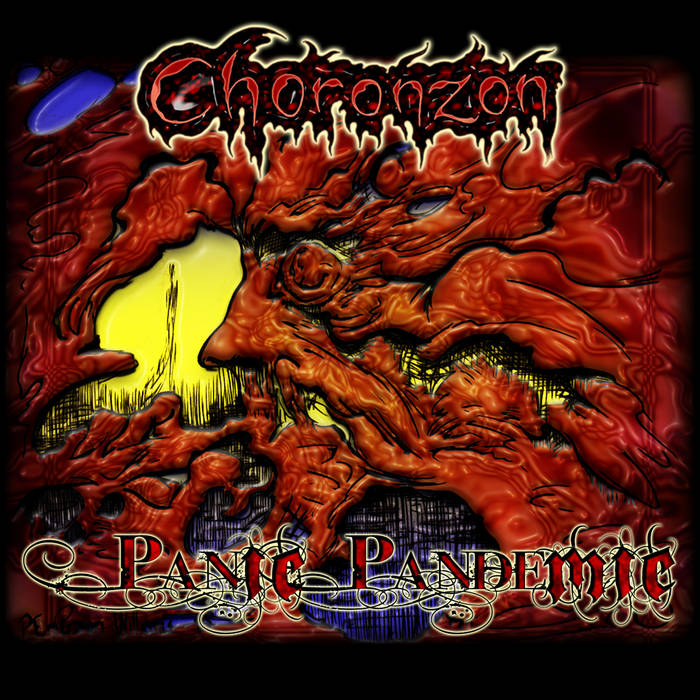 AGOP A meditation on the end of life as it was happening. I suggest you get the book as well, which include the amazing lyrics, story and beautiful artwork. Favorite track: The Process of Conditioning.

With Panic Pandemic, the process begun in the prior album continues and complexifies. The skeleton of the creature Psychosis Ex Machina devoured and subsumed is now transmogrified into an armature of bones on which is hung a mage-fetish, an effigy-object of sacrifice: standing for what? Western Civilization? Your inner soul? The “Revolution”? All of the above? All of the below? The reality-twister that is the artist/mage in cahoots with cohort Choronzon, madly and yet with infinite care decorates these remains with the detritus of cultural effluvia turned inside out, into caricatures and mockeries, ornaments of fear, disdain, madness and love, carrying memory-imprints of notions, persons, lives, and what happens when such are turned against themselves and drained of purity of essence. Some of these ornaments have mirrors at their centres in which you’ll see a familiar face. Stare too long into them, and you may scare yourself blind…but if you dare not look, you might just be, already.

This album release isn’t merely a bunch of “songs” but an elabourate interplay of word, sound and image, heralding the direction of Choronzon’s future, reaching out far beyond the limits imposed upon a “rock band”.

Panic Pandemic is two CDs – a double-album of moving music and noise, resisting all genre-labels, while engulfing and digesting same into itself. – The audio comes bundled with a full-colour print book by P. Emerson Williams, an accomplished artist as well as noisician, which features his artworks in both oil and digital formats, with the sort of paper quality and printing they deserve. Though it’s the size of a “coffee-table” book, it’s not just a bunch of pretty pictures. Textuality runs through and around the images: a twisting, interleaved alternation of monologue and moodscape that just might scare the living shit out of you. And you thought you didn’t scare easily? There’s a first time for everything… A rare experience, not to be missed.

The wrecks could be seen, though nobody ever noticed them, their vehicles, perfect in their shine, cell phones always at their ear, or seemingly talking to themselves with their earpieces in. They are but characters in a nightmare being experienced by a drunk lying on a street in a parallel universe. He wonders in his sleep who could possibly want to listen to these vile, empty vessels for hours on end.

A poison in his gut twists at his insides, so he shifts in his stupor. A wave engulfs a small nation. A war drags on in an arid and hot part of the globe. Death-squads wander through the surrounding streets. They know who he is and wish to separate this pole axed creator and the world he’s dreamt up. If they can bring it into a separate existence they can colonize it, for it already contains a population of perfect slaves.

Gods were created, and though formed fully in the minds of humans, ruled in unquestioned tyranny. Every one was dead by the end, though they had never lived. They had been brought into existence by human thought and feeling, but had also pre-dated them. They survive the end and predate the beginning. None of them were real.

The dreamer coughs and a million press releases go out to announce the death of culture in the form of hundreds of talent-deprived young droids. Money shifts its tides in their direction. Perfect shiny vehicles blast the news, rattling windows, killing conversation. A thousand college students die of alcohol poisoning.

Lament in the pandemic, rooted in instance and position
Heavens and Shock in the air decay in derision
The agitation has eased and the risk abated
And those faith-adorned have uprooted its identity
Brave retractions have betrayed my collapse
Possession has seared you to the Body of abandon
Formless danced the conflict procurers
Rapturous sighs of ecstasy and the chaos of dawn

Confidence flowed to create the storm
Triumph flourishes, extinction unobserved
Viral fury and the horror of us, of you
Choronzon burns up the Human frenzy
Contrasting illusive rides on the current
It shrills in the intention of illusory crisis

An experimental multimedia project using the name Choronzon[16] has existed since the late eighties, beginning as two separate and unknown cassette-culture projects, one from the west coast of the United States and the other from the eastern USA. When the internet made each project aware of the other, they fused these into one project. As of 2012, they operate the domains for the name Choronzon under .org, .net, and .info, and have released several albums on CD as well as publishing a printed book, Panic Pandemic[17]. Claiming that what they do is not merely music, but also actual magick acts fused into it, the project's works are distributed through both underground and over-ground means. The ″demon″ Choronzon is cited as an actual member of the project,[18] part of which has centered on extending the mythos around this entity past the Thelemic version of Choronzon into a modernized ″post-abyssal″ one, presenting Choronzon as an anti-hero and demigod, after becoming a reversed Satan in the form of a ″risen demon″.