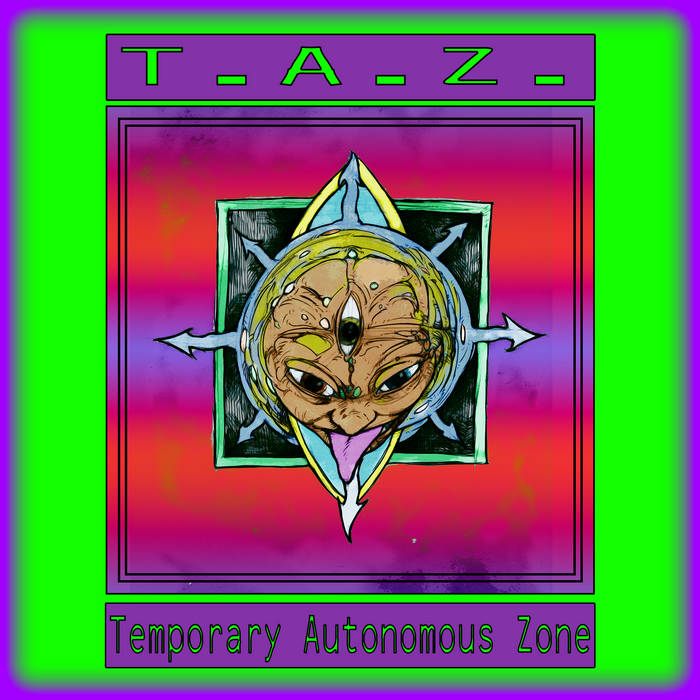 Temporary Autonomous Zone
Imagine this. It’s 1993, the book T.A.Z. (The Temporary Autonomous Zone) is a hot, hot, hot commodity. It’s just been featured as the “manual” of the movement in a cover story about Cyberpunk. Its author, the notorious Hakim Bey has never appeared live anywhere before, and many people still did not know that Hakim Bey was a nom de plume for none other than Peter Lamborn Wilson. Up until I asked him to do the show, he had tried to keep this fact mostly secret. This is the setting for the recording you have in your hand. A venue, filled to the rafters with attendees, smoke-filled, hot and buzzing with energy.

But how did we get here?

Earlier the year before, while I was living in Santa Cruz, CA my friend Nick Herbert had turned me on to the original broadsheets, which later were published as a paperback book now known as T.A.Z. Nick had given me the broadsheets one day at a meeting of our salon, the Formless Ocean Group. The F.O.G., as we called it, was a fun little salon group I had been invited to which included at various times authors like: Peter Stafford, Nick Herbert, Nina Graboi, Elizabeth Gipps, Paddy Long, Robert Forte, David Jay Brown, Robert Anton Wilson, Timothy Leary, John Lilly, myself and many others. Being rather excited by the energy and the message expressed in the broadsheets, I had asked Nick to put me in touch with Bey. So he gave me his number in New York.
Peter (Hakim) and I talked on the phone at length several times that year. I decided to move to San Francisco and produce some counterculture variety shows (“It’ll be like vaudeville on LSD” was my motto) so I asked Peter if he’d appear as Hakim Bey in one of them. He said he’d consider it. I finished up a very successful show called Interzone in Santa Cruz [ joseph.matheny.com/PDFS/i-zone.pdf ] and moved my home and office to San Francisco.

After a year of producing small literary events and collaborating on some fairly large scale raves, I decided to mount my idea of a counterculture variety show. I phoned Peter who agreed to do it, so I then contacted my old friends, Robert Anton Wilson, Rob Brezsny, Nick Herbert, DJ Cheb i Sabah, and a myriad of experimental theater people, artists, poets, musicians and general rabbles-rousers. Everybody wanted in.

I found the perfect venue, an anarchist collective called Kommotion International, booked a date in February, and printed a few hundred posters and fliers. I also sent the requisite press releases to various outlets around the city. Then the unexpected happened. As if on cue, Time magazine did a cover story about cyberpunk and featured

T.A.Z. as the unofficial “manual” of the “movement”. I use quotation marks on those words, “manual” and “movement” because to anyone even remotely connected to the milieu represented in the article, the idea that we were a “movement” that had a “manual” was laughable at best. It’s a total oxymoron, like saying: “The organizing principles of anarchy.” Soon after the article ran, my phone began to ring non-stop with everything from local newspaper and radio reporters wanting to know more about the show to every lefty and counterculture person and organization imaginable who suddenly wanted to be my “friend”. (There are those quotation marks again.) Of course, everybody who called ended the conversation with “can I be comped?”

The venue held about 1500 people, if tightly packed, and I had already circulated guest list requests to the participants. I was pretty sure we could snug another 100 people up in the balcony, so that should cover the guest lists as well as some special paying guests who had done us favors. Unfortunately I had to turn down a lot of people, including personal friends for comps. As it was we could have easily sold another 1500 tickets.

I suddenly had a hit on my hands and I took to singing songs from Mel Brook’s movie, The Producers (the original with Zero Mostel, not the weak remake with Broderick and Lane) as I went about preparing for what was turning into the world 3, of producing and staging shows.

Eventually the week arrived for the show. Peter Wilson arrived a few days early, as did Bob Wilson and Nick Herbert. James Koehnline also came down from Seattle, so suddenly my house was Kaos Central. Not that I’m complaining, mind you. Some very fertile conversations took place into the wee hours of the morning and seeds were planted for many future collaborations. The Incunabula Papers was one of the projects born from this strange conjunction of chaotes, but I’ll write more about that later in an upcoming book.

The show was not nearly as chaotic as one might imagine with an extra 1500 plus people milling around outside hoping we’d do a second show or maybe we’d announce we’d miscounted. Sorry folks, no such luck. As shows go, this one stood out as a prime example of what can happen if everyone at least tries to get along. No violence, only one or two stage jumpers which Rob handled by including them in the act. One or two hecklers which were instantly heckled back by the audience. A few people from the audience hugged and kissed me when it was over. Amazing really, a truly magical moment.

We sold out and as I said earlier, we could have easily sold another show, had we planned for one. However, if you were one of the unlucky souls who missed the show, or if you were there and would like to revisit it, what you hold in your hands is an excellent audio representation of the highlights of the show. The entire shows ran 4 plus hours, and we may release the entire audio recording in the future; however since many pieces were visual in nature, we took the most audio-friendly ones and put them together here for your aural and cerebral enjoyment. This is literally a piece of history that you hold in your hands. I hope you enjoy listening to it as much as I enjoyed playing my part in conjuring it up.
Mutatis Mutandis!